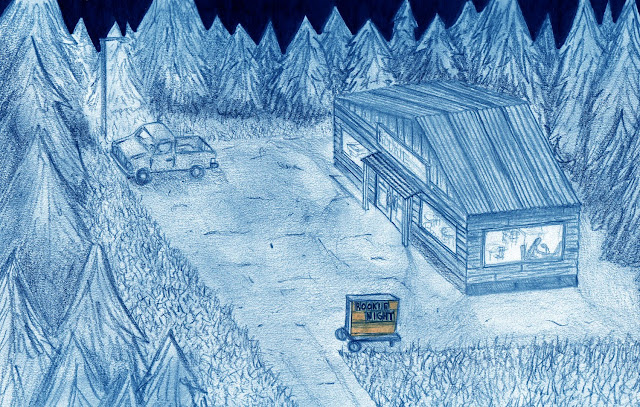 Wonderful news! My short story "Either Raygun Or" appears in the Fall 2021 issue of storySouth — their 20th Anniversary issue! Many thanks to a fine publication and super cool fiction editor! "Either Raygun Or" remixes early 80's Ozark punk, Ronald Reagan, Brian Wilson, and Neil Young into something I find sweet and strange. I'm deeply glad it has gone wild in the world.

Other than that, I don't know. All my love.

I know your bosses, demagogues, gods, and other discourse keepers grind you down. Perhaps you may steal quiet moments to reflect, newly be. Reading helps if the text is open rather than closed. My new old short story "Gateway to the Rest" is available here in the warm summer issue of Eclectica Magazine.
Posted by j at 10:07 AM

Something big. Something questionable. Just down the windy beach from here slips of paper were exchanged in the night and now. . .

Every episode from the first season of Rookie Night Radio Theater is available thanks to our founding friends at Freekradio. Other goods too. Don't say we told you to, but.

You can put your fist through this whole lousy beautiful town.
Posted by j at 10:20 AM 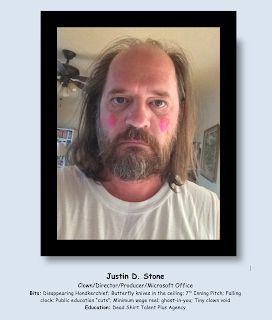 About those rumors of a Justin Stone's Rookie Night Season Two...?

Let's just say some new boxes have been shipped to the Beach and Dog's waking before dawn again.

This door, for better and worse, is almost always wide open. The breeze gets in you. Doug says he's half salt.
Posted by j at 3:29 PM

We never told you that Episode Two, otherwise known as The Deuce Squat, could be listened to over here. It is the natural position for a body to take.
Posted by j at 5:03 AM

It is preternaturally quiet in Dead Shirt.


Early on there was the Letter People, Lindbergh's baby, Loch Ness Monster, and It.
Later all was confused.

I write you now just to see if you're better.

Rookie Night Episode One Now On A String 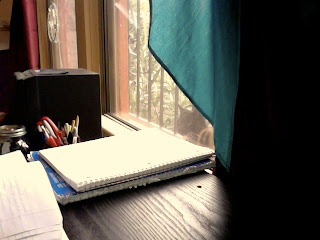 Where were we? Here. One may now listen to Justin Stone's Rookie Night Radio Show Episode One forever and forever.
Posted by j at 10:25 AM

In the wake of last year's breakout season, the Dead Shirt city council recently voted to buy new (and much needed!) uniforms for Dead Shirt's co-ed softball team the Dusk Devils. Great job, folks. Small ball. Way to put those bunts down and move about the bases. In the same meeting the city council, on a unanimous 5-3 vote, approved the new city motto:

Thanks for the submission, Doug. You have a touch with glyph.

And you keep asking, so, yes: rumors of Justin Stone's Rookie Night SEASON TWO are swirling, but we can neither confirm nor deny such rumors at this time. Last time we saw Justin he said he was again working on his "weightless machine" and that "a new basis for human purpose" may be established. While we are a bit skeptical of such claims, we recognize that Justin does often surprise us. He did say that he was thinking about hiring a new joke writer. 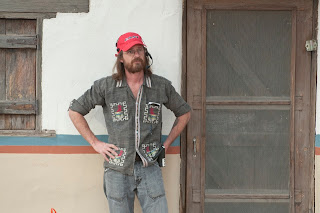 Photograph by Walter Royall
Posted by j at 8:16 PM

the world still as ever

your deep night
homeless radio sensation
Posted by j at 11:17 AM

"Drop and give me twenty-five." -- Coach

Freekradio's got her a warm, well-lit, and velvety new media room over here. Go have a look-see. You will find episodes of Rookie Night for easy listen under the "talk" section of the media room. Go have a look-see. A listen-see. A lot of neat stuff over there. Like an Atlantis bath-house you might go and stay for days. Or years.
Posted by j at 6:35 AM

Honey, you may now download podcasts of the Rookie Night radio theater! 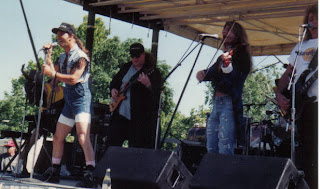 Kansas plays the Dead Shirt County Fair, 1994, beginning what
The Dead Shirt Commoner called "A County-Wide Lost Month"
While we take a long-haired hiatus from new episodes, our good friend Freekradio is now hosting downloadable podcasts of all past episodes of Justin Stone's Rookie Night radio theater show. Click here to check out the Freekradio Podcast Archive tonight. Download and listen to episodes Rookie Night or something else. Freekradio offers a great archive of music and talk shows. Tell a friend about Rookie Night. If you and that friend listen, you'll be able to say that the two of you were listeners number 3 and 4, after my mom and Doug's cherished Aunt Konny. It is a well-heeled club. You may watch our phalanx practice maneuvers and maybe even take the beach at any 4 a.m. in the morning.
Gawd. I'll admit, I would love to have four listeners.
Know we are out here. Know Doug moves like a slightly overweight puma. Know an old dog has requested a new trick. Know work is happening and that when you hear what we have got in store you might find yourself in the state of idyllic confusion that precedes the ecstatic truth.
Posted by j at 8:10 PM

Rookie Night, Episode Six, running this week at the usual times on freekradio.com, offers a little something different. A musical mix experimentation, and a short one at that. Consider it a musical interlude. But there is here some real good stuff to hear and so I recommend you tune in. There will likely be a new show in the future on freekradio in which I only play music, and this show is kind of a reach in that direction. I wondered how it would sound. And I like.

Thank you for listening. This is a strange operation, I know, with an intermittent release schedule, but even tuning in to listen to the old shows is, I think, a worthwhile endeavor, as they are thick. Repeat listens can only aid in the getting along.

Episode Five, because one guy demanded it 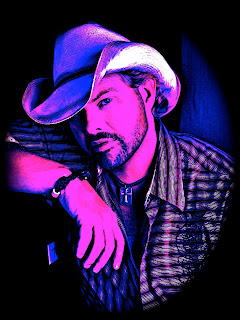 A Wonderful Work Of Art Submitted By
Rookie Night's First And Only Fan Club Member
Rookie Night, Episode Five is up and running. Stare as long as you like, it'll last longer. A relaxed gaze. This week is the county fair, and the county is fair. Come on down to Dead Shirt, "The Town That Sweats Together."
This week's episode is presented in (the still maybe unreliable) 11D. Doug has been at the drawing board, visualizing. Wear your goggles and galoshes. Wear your floppy hats. It's wet in here.
Listen to Rookie Night, Episode Five starting tonight, Sunday, August 8, at freekradio.com, 10 pm Central Standard Time. That's 8 pm on the West Coast.
Posted by j at 3:52 PM

Download Episodes One, Two, and Three, take 'em home, massage into neck and lower back 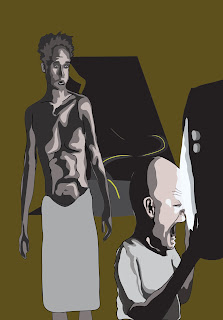 I am going to make Episodes One, Two, and Three of Rookie Night radio theater available one week for download. These shows are best listened to late at night, at a remove of some sort.

Click here to download Rookie Night, Episode One. This show is approximately 52 minutes in length. May cause dizziness.

Click here to download Rookie Night, Episode Two.This show is approximately 43 minutes in length. May induce a sense of floating.

Click here to download Rookie Night, Episode Three -- "The Very Special Rock 'n' Roll Show". This show is approximately 58 minutes in length. May cause you to believe your hair is growing.

Rookie Night, Episode Four is currently airing on Freekradio.com in the usual Wednesday and Sunday night time slots.
Posted by j at 7:33 PM 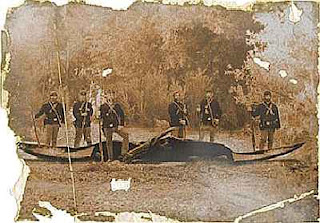 The Rookie Night Radio Show--near the top of your mother's blog's year-end worst-of list. Proud winner of the Dislocation Award at last year's Poddys.
Posted by j at 4:21 PM

Episode Three rides on out to Goon Flats, marries the crickets 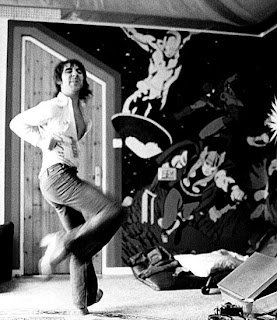 The Mayor of Dead Shirt, 1928
Rookie Night, Episode Two will air on Wednesday night, June 2, at the normal time:

As always, you may listen at http://freekradio.com/

A new radio show. For the mid-night denizen, the peaked owls, the lost, the hopeful, the crooked of tooth. The voice of Dead Shirt, Florida.

What we would like to have happen is new episodes play every Sunday, and then re-run on Wednesday. But it is difficult to know what exactly is coming out of Dead Shirt. Something will air every Sunday and Wednesday at Freekradio.

Eventually every episode will also be available as downloadable podcast. Stay tuned.
Posted by j at 8:41 PM 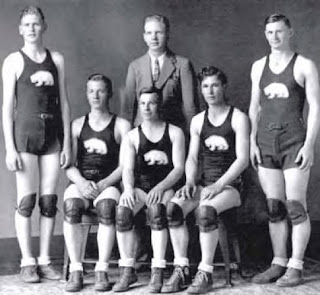 Dead Shirt Lions, 1983
Florida 1-B State Champions
(front, l to r) Cherry Rudolph, Benny Dillpot, Fredman Cromer
(back, l to r) Jack Monjack, Coach Connie Lewiston, Max "Boy" Clyde
"I shall never forget the way this town swoll with pride, carried aloft by these boys who knew so little, but left their red guts on every hardwood floor in every hard town in the state."
--Coach Connie Lewiston
Posted by j at 3:44 PM